System Assessment of WUSN Using NB-IoT UAV-Aided Networks in Potato Crops
View Item
JavaScript is disabled for your browser. Some features of this site may not work without it.

Unmanned Aerial Vehicles (UAV) are part of precision agriculture; also, their impact on fast deployable wireless communication is offering new solutions and systems never envisioned before such as collecting information from underground sensors by using low power Internet of Things (IoT) technologies. In this paper, we propose a (Narrow Band IoT) NB-IoT system for collecting underground soil parameters in potato crops using a UAV-aided network. To this end, a simulation tool implementing a gateway mounted on a UAV using NB-IoT based access network and LTE based backhaul network is developed. This tool evaluates the performance of a realistic scenario in a potato field near Bogota, Colombia, accounting for real size packets in a complete IoT application. While computing the wireless link quality, it allocates access and backhaul resources simultaneously based on the technologies used. We compare the performance of wireless underground sensors buried in dry and wet soils at four different depths. Results show that a single drone with 50 seconds of flight time could satisfy more than 2000 sensors deployed in a 20 hectares field, depending on the buried depth and soil characteristics. We found that an optimal flight altitude is located between 60 m and 80 m for buried sensors. Moreover, we establish that the water content reduces the maximum reachable buried depth from 70 cm in dry soils, down to 30 cm in wet ones. Besides, we found that in the proposed scenario, sensors' battery life could last up to 82 months for above ground sensors and 77 months for the deepest buried ones. Finally, we discuss the influence of the sensor's density and buried depth, the flight service time and altitude in power-constrained conditions and we propose optimal configuration to improve system performance. 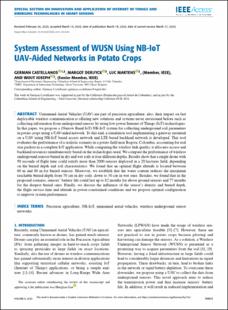 Except where otherwise noted, this item's license is described as https://creativecommons.org/licenses/by/4.0/