The differences between academy and industry when it comes to working settings (schedules, workload, working environments, etc.), have motivated the development of a significant body of research on how to achieve meaningful learning processes of Software Development Life Cycles (SDLC) in the former, in order to ease the incorporation processes of new Software Engineers in the latter. Such research works have evolved together with the SDLC themselves, in particular between the early 2000s when most programs taught highly prescriptive methodologies like RUP/UP or Extreme Programming (XP) [1, 2, 3], and a decade later, when agile SDLC like SCRUM had already become one of the most widespread agile methodologies in the industry and academia slowly began to embrace it (near 100 references in Google Scholar for "teaching agile software development" between 2010 and 2017). 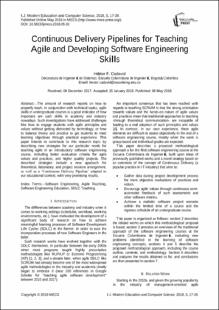