Built-in equality and inequality predicates based on comparison of canonical forms in algebraic specifications are frequently used because they are handy and efficient. However, their use places algebraic specifications with initial algebra semantics beyond the pale of theorem proving tools based, for example, on explicit or inductionless induction techniques, and of other formal tools for checking key properties such as confluence, termination, and sufficient completeness. Such specifications would instead be amenable to formal analysis if an equationally-defined equality predicate enriching the algebraic data types were to be added to them. Furthermore, having an equationally-defined equality predicate is very useful in its own right, particularly in inductive theorem proving. Is it possible to effectively define a theory transformation E↦E≃ that extends an algebraic specification E to a specification E≃ having an equationally-defined equality predicate? This paper answers this question in the affirmative for a broad class of order-sorted conditional specifications E that are sort-decreasing, ground confluent, and operationally terminating modulo axioms B and have a subsignature of constructors. The axioms B can consist of associativity, or commutativity, or associativity-commutativity axioms, so that the constructors are free modulo B. We prove that the transformation E↦E≃ preserves all the just-mentioned properties of E . The transformation has been automated in Maude using reflection and is used in several Maude formal tools. 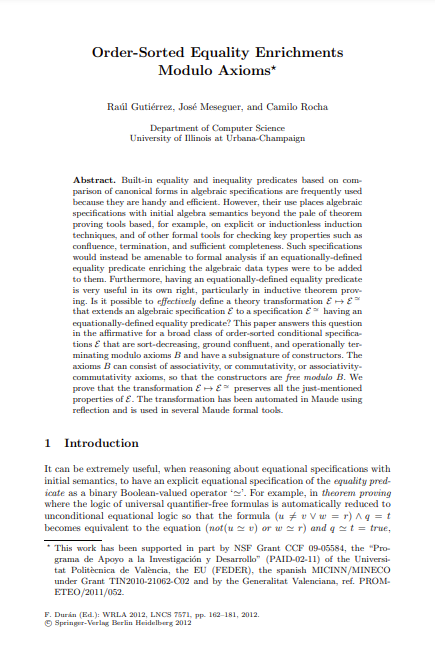