The Plan Execution Interchange Language (PLEXIL) is a synchronous language developed by NASA to support autonomous spacecraft operations. In this paper, we propose a rewriting logic semantics of PLEXIL in Maude, a high-performance logical engine. The rewriting logic semantics is by itself a formal interpreter of the language and can be used as a semantic benchmark for the implementation of PLEXIL executives. The implementation in Maude has the additional benefit of making available to PLEXIL designers and developers all the formal analysis and verification tools provided by Maude. The formalization of the PLEXIL semantics in rewriting logic poses an interesting challenge due to the synchronous nature of the language and the prioritized rules defining its semantics. To overcome this difficulty, we propose a general procedure for simulating synchronous set relations in rewriting logic that is sound and, for deterministic relations, complete. We also report on two issues at the design level of the original PLEXIL semantics that were identified with the help of the executable specification in Maude. 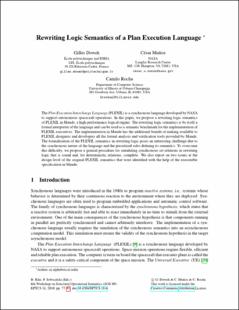