Explosions and Structural Fragments as Industrial Hazard: Domino Effect and Risks
View Item
JavaScript is disabled for your browser. Some features of this site may not work without it.

This study deals with industrial accidents and domino effects that may occur in an industrial plant, the initial accident being supposed to take place in any of the tanks either under or at atmospheric pressure. This initial sequence might generate sets of structural fragments, fire balls, blast waves as well as critical losses of containment (liquid and gas) that threaten the surrounding facilities and may cause serious damages. The structural fragments, the blast wave and the fire ball can be described following database and feedback collected from past accidents. The vulnerability of the potential targeted tanks is investigated in order to assess the risk of propagation of the first sequence of industrial hazard. Cascading sequences of accidents, explosions and fires can take place, giving rise to the domino effect. This risk of domino effect occurrence is investigated herein. The interaction and the behavior of the targets affected or impacted by the first explosion effects are described by adequate simplified mechanical models: perforation and penetration of metal fragments when they impact surrounding tanks, as well as global failure such as overturning, buckling, excessive bending or shear effects, etc. Sensitivity analysis is performed thanks to Monte Carlo simulations: the probability of impact and risk of failure of target tanks are reported. A comparison between risks due to blast wave and fragments impacts is performed. 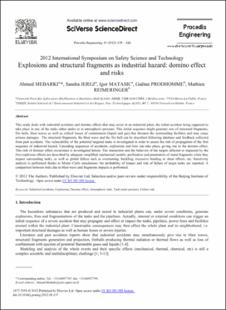 Except where otherwise noted, this item's license is described as © 2012 Published by Elsevier Ltd